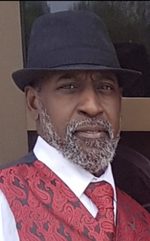 Daniel Renard Anderson, Sr. was born in Little Rock, Arkansas on July 8th 1962 to John and Evelyn Anderson. He confessed Christ at the age of twelve in 1975. He attended First Pentecostal, where he was baptized in the name of Jesus Christ and filled with the Holy Ghost according to Acts 2:38. Daniel received his education at Jacksonville High School and was later called and anointed to preach and teach the word of God. In his earlier years, he became a minister at Community Holiness in Tampa, Florida under the leadership of Bishop Rueben Sledge. There, he met and baptized a young woman named Sharon who later became his wife. Together, Daniel and Sharon Anderson has eight children, Daniel Jr., Tammy, Jeneicea, Tamika, Tykeivea, John, Evelyn and Raheem.

Pastor Daniel R. Anderson Sr. departed this life on Wednesday, October 16, 2019 in Jacksonville, Florida. He was preceded in death by his father and mother, John and Evelyn Anderson; siblings, Donnie Anderson, Delois Ross, and Carl Anderson.

All rights reserved. This obituary is also archived at obittree.com